Workplace inclusion gets real at Stramit

One of our Albury team members has shown exactly what inclusion can do for his colleagues on the factory floor.

As Production Manager at Stramit's Albury manufacturing facility, Robert Smallwood decided to undertake an 18-week Auslan sign language course so he could communicate with one of his employees.

“I knew that it can be tough communicating when those around you don't understand sign language.

“I just really wanted to help John, while making a real difference to the team,” he says.

Local Auslan Coach Pauline Hume says more employees should follow Robert's lead and make sure everyone in the workplace has a voice. 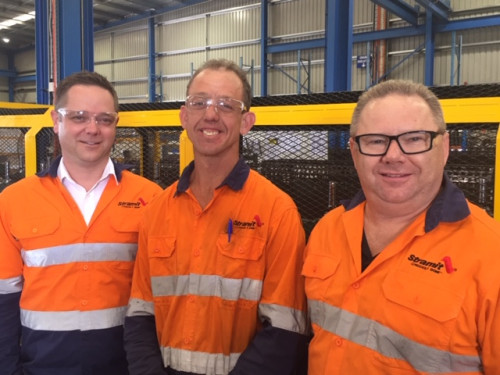 “Everyone deserves to be heard and we're so impressed with Robert's initiative – he truly wanted his staff member, John, to have a voice in the workplace.

“We need more businesses like Stramit to support their staff, so they too can do these courses and make sure inclusion is more than just aspirational – it's a reality.”

In fact, Robert's efforts saw him crowned 2018 Stramitarian at last year’s Strammy’s Award ceremony. John King, the employee who can now communicate freely with his team, says the benefits for him have been profound.

“When Robert started to sign, I wrote him a note that said I never had a boss that learnt sign language for me,” he says.

“No one has ever done this for me and I really appreciate his efforts – an 18-week course, three hours a week, is a big commitment,” he says.

Since Robert's efforts, Brad Sloan, Branch Manager of Stramit Albury, has undertaken the 18-week Auslan course and is already signing to John on a regular basis.

Congratulations to Robert and the team for leading the way on inclusion in the workplace.