Stramit’s quality products have been used to embed an iconic scientific symbol in a new building at one of Cairns’ leading primary and secondary schools. 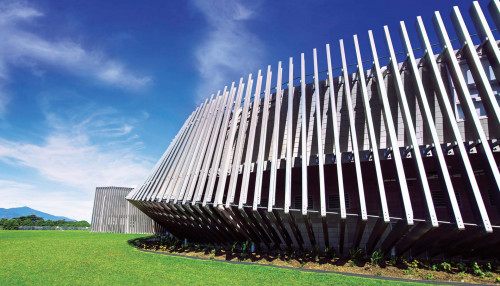 The Trinity Anglican School’s (TAS) high-tech science facility was designed by Charles Wright of Charles Wright Architects, who was tasked with designing an inspiring and contemporary facility.

Charles says integrating Stramit® C Purlins into the brief enabled him to create a design characterised by striking science symbols.

“Inspired by the double helix shape of a DNA molecule, the innovative facade of the building was built from Stramit® C Purlins and moulded to form a three-dimensional, steel-wound exterior for the senior science building,” he said.

In addition to promoting iconic scientific images, Charles explains the design brief also called for an efficient and well planned landmark building that could withstand the unpredictable Cairns weather conditions.

“We needed a supplied proprietary finish that was going to stand the test of time,” Charles recalls.

“We came across ZAM® finish, a coating suitable for structural purlins when we were researching the best coatings for the feature building facade.”

Stramit® C Purlins were roll formed from ZAM® coated steel to provide greater corrosion resistance. The ZAM® coating complies as a Type ZM coating in Australian Standard AS1397 – 2011 and is a blend of zinc, aluminium (6%) and magnesium (3%), providing high corrosion protection in salty environments. The end result is better durability in Cairns’ tropical climate when compared to hot-dip galvanised steel.

“Stramit ZAM® gave us a new look to steel that had not previously been available. I would definitely recommend using Stramit ZAM® as a feature finish to exposed lightweight steel products.”

Today, TAS’s science building integrates impressively into the school landscape, and the end result is an innovative facility that serves as a benchmark for educational buildings in the tropics.

Workplace inclusion gets real at Stramit

One of our Albury team members has shown exactly what inclusion can do for his colleagues on the factory floor.